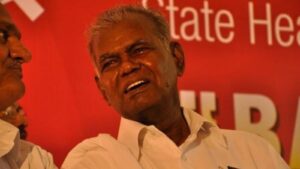 This is not the first time that Nallakannu has donated his money that he was given for public cause. When he received Rs 1 crore from the party on the occasion of turning 80, the leader promptly returned it to the party. In 2008, when he was awarded the Ambedkar award by the State government, he donated the cash component to the party and farmers union.

‘Thagaisal Tamizhar’ award, instituted by the State government in 2021, was presented to a Left leader for the second consecutive year. Last year, the award was given to N Sankaraiah. The Chief Minister presented the Dr APJ Abdul