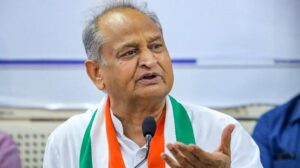 Rajasthan Chief Minister Ashok Gehlot on Friday confirmed his candidature for the upcoming Congress president election and said that Rahul Gandhi has made it clear that “no member of the Gandhi family” would become the next party chief. Speaking to the media, Gehlot, who is in Kerala to take part in the Bharat Jodo Yatra, said, “I said earlier that I will request him (Rahul Gandhi) to accept this post when all the Congress Committees are passing resolutions in this regard. He made it clear that no one from the Gandhi family will become the next chief. He said he has decided this due to some reasons, a non-Gandhi family member will become the party chief”.When asked if it is because of the BJP’s allegations of nepotism, he said, “Rahul Gandhi said it in 2019 that he would work more without any post. He had said this in the working committee. He said that he still stands on his statement that he would work for the party without a post, as the party says.”