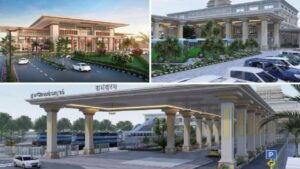 Chennai : The work of station redevelopment of nine stations –five in Tamilnadu, three in Kerala and the Puducherry station–in Southern Railway has been entrusted to the Zonal Railway itself.The nine stations are Chennai Egmore, Katpadi, Madurai, Rameswaram and Kanniyakumari in Tamil Nadu, Ernakulam Jn, Ernakulam Town and Kollam in Kerala and Puducherry.It may be recalled that the foundation stone for redevelopment of five stations in Tamil Nadu and three in Kerala were laid by Prime Minister Narendra Modi.Of these nine stations, contract work for redevelopment has been awarded to all stations barring Chennai Egmore and Kanniyakumari, for which tenders were opened and under finalisation for awarding the contract.