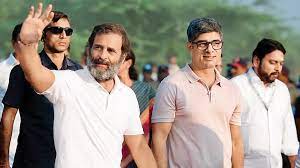 New Delhi: Congress leader Rahul Gandhi, while addressing a rally during Bharat Jodo Yatra in Maharashtra’s Malegaon, said that Modi government is playing with youths’ sentiments in the name of Agniveer.

Calling out the Centre over hiked prices, Congress MP Rahul Gandhi on Wednesday slammed the ruling party and said that the prices of essential items were pushed to the higher side.

His remarks came while addressing the masses during Bharat Jodo Yatra in Malegaon, Maharashtra.

“We are walking in the Bharat Jodo Yatra to protect the Constitution…Farmer’s basic needs are diesel, petrol, gas cylinders but the current govt hiked the rates of these things,” said Congress MP Rahul Gandhi.

He also stressed on the Agniveer scheme and said that the Modi-led government was playing with the sentiments of the youth.

Tags:congress leader rahul gandhisaid that Modi government is playing with youths' sentiments in the name of Agniveer.while addressing a rally during Bharat Jodo Yatra in Maharashtra's Malegaon