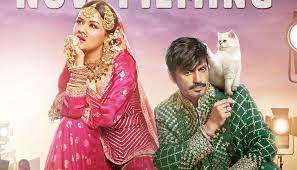 Madhuri Dixit Nene’s new film ‘Maja Ma’ is all set to be released on October 6.The film will be out on Amazon Prime Video.Sharing the update, the streamer took to Instagram and dropped Madhuri’s look from the film.“The dancing diva is back and how! blessing your screens to do away with your mid-week blues – now we’re feeling Maja Ma…watch #MajaMaOnPrime, Oct 6,” a post read on Prime Video’s Instagram handle.Directed by Anand Tiwari and written by Sumit Batheja, ‘Maja Ma’ is touted as a “family entertainer, set against the celebratory backdrop of a traditional festival and a quintessential, colourful Indian wedding”.

Tags:Madhuri Dixit's Maja Ma to be out on October 6