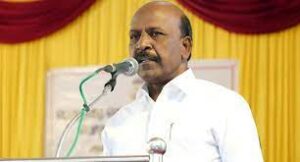 Chennai: Health Minister M Subramanian has rejected the demands of the Opposition and allies to reduce the annual tuition fees of students already studying in Cuddalore Government Medical College, i.e., the erstwhile Raja Muthiah Medical College, which was part of Annamalai University.

Replying to the demand of the members of the AIADMK, Congress, PMK and CPI that the fees for these students should be collected on par with other government medical colleges, the Minister told the Assembly that already, the fees were reduced to the tune of Rs 119 crore and a further reduction as demanded by the students would cost an additional expenditure of Rs 300 crore to the State exchequer. He clarified the students who joined the college after it was made a government college have been paying the fees on par with other government colleges in the State.

Subramanian said agreeing to any further reduction in fees would set a bad precedent as it would be an injustice to the students who did not join the course because of the high fees structure.

In 2020-21, the State government announced that Rajah Muthiah Medical College, then attached to Annamalai University in Chidambaram, would function as a government medical college for Cuddalore district.