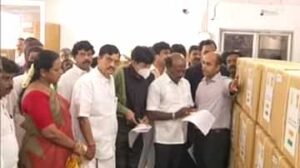 Chennai : Tamilnadu Health Minister Ma Subramanian said that 137 types of medical supplies worth Rs 28 crore will be sent to Sri Lanka in a couple of days.

Subramanian along with Health Secretary J Radhakrishnan inspected the medical supplies on Sunday.

Speaking to mediapersons, Subramaian said that Rs 8 crore of medical supplies will be sent to Sri Lanka in the first phase.

As the first instalment, 53 medicines, and two special medicines will be sent. The medicines will be used in treatment of cold and fever. These medicines are being sent on humanitarian grounds to reach the affected people there irrespective of whether they are Sinhalese or Tamil,/he added.

Earlier on 29 April, Chief Minister M K Stalin moved a resolution in the state Assembly urging the Central government to permit the state government to send essential commodities including rice, pulses, dairy products and medicines to Sri Lanka amid the ongoing economic crisis.

Stalin said, On a humanitarian basis we should provide supporting hands to them. People are standing in long queues to get petrol and diesel. The power cut is there all over the nation, public transport also decreased. Tamils are suffering. Pesticide in Jaffna estates is being sold for ₹32,000 which was once sold for ₹1200.

In a meeting with Prime Minister Narendra Modi on March 31, Tamilnadu Chief Minister MK Stalin discussed the economic condition of Sri Lanka and proposed to send relief materials including food and medicines from the state to Sri Lanka, sources said.

Amid the worst economic crisis in Sri Lanka, India took another initiative to extend support and supplied 12 shipments and over 400,000 Metric Tones (MT) of fuel to the island nation.The High Commission of India in Sri Lanka took to its Twitter handle to make the announcement of the consignment.n12 shipments and more than 400,000 MT of fuel!! Latest consignment of #Diesel from #India under the credit line for fuel was delivered in #Colombo by Torm Helvig, the High Commission of India in Colombo tweeted.

Tags:Extending a helping handTN to send 137 types of medical supplies to Sri Lanka